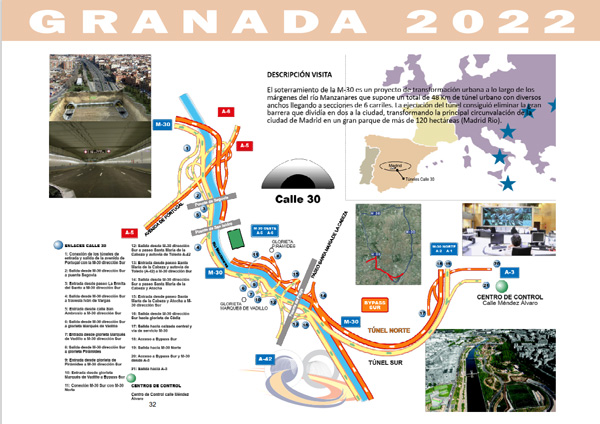 Description of the visit

The burying of the M-30 is an urban transformation project along the banks of the Manzanares River that involves a total of 48 km of urban tunnel with various widths reaching sections of 6 lanes. The execution of the tunnel managed to eliminate the great barrier that divided the city in two, transforming Madrid’s main ring road into a large park of more than 120 hectares

MORE INFO ABOUT THE VISIT 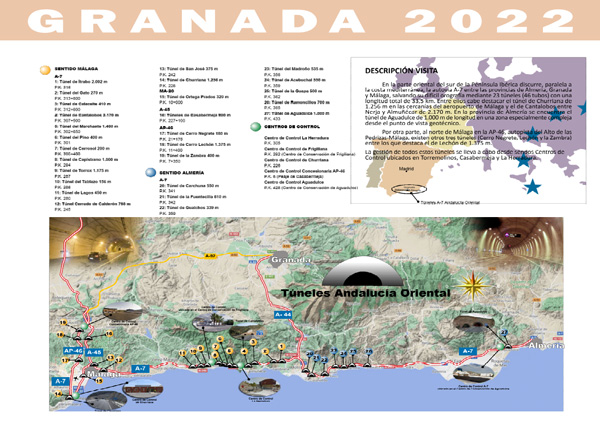 Description of the visit

In the eastern part of the south of the Iberian Peninsula, parallel to the Mediterranean coast, the A-7 motorway runs between the provinces of Almería, Granada and Málaga, overcoming its difficult orography through 23 tunnels (46 tubes) with a total length of 33 .5 km. Among them, the 1,256 m Churriana tunnel near Malaga airport and the 2,170 m Cantalobos tunnel between Nerja and Almuñecar stand out. The Aguadulce tunnel, 1,000 m long, is located in the province of Almería in a specifically complex area from a geotechnical point of view.

On the other hand, to the north of Malaga on the AP-46, the Alto de las Pedrizas highway (Málaga), there are three other tunnels (Cerro Negrete, Lechón and La Zambra), among which the 1,375 m Lechón tunnel stands out.

The management of all these tunnels is carried out from two Control Centers located in Torremolinos, Casabermeja and La Herradura.

MORE INFO ABOUT THE VISIT